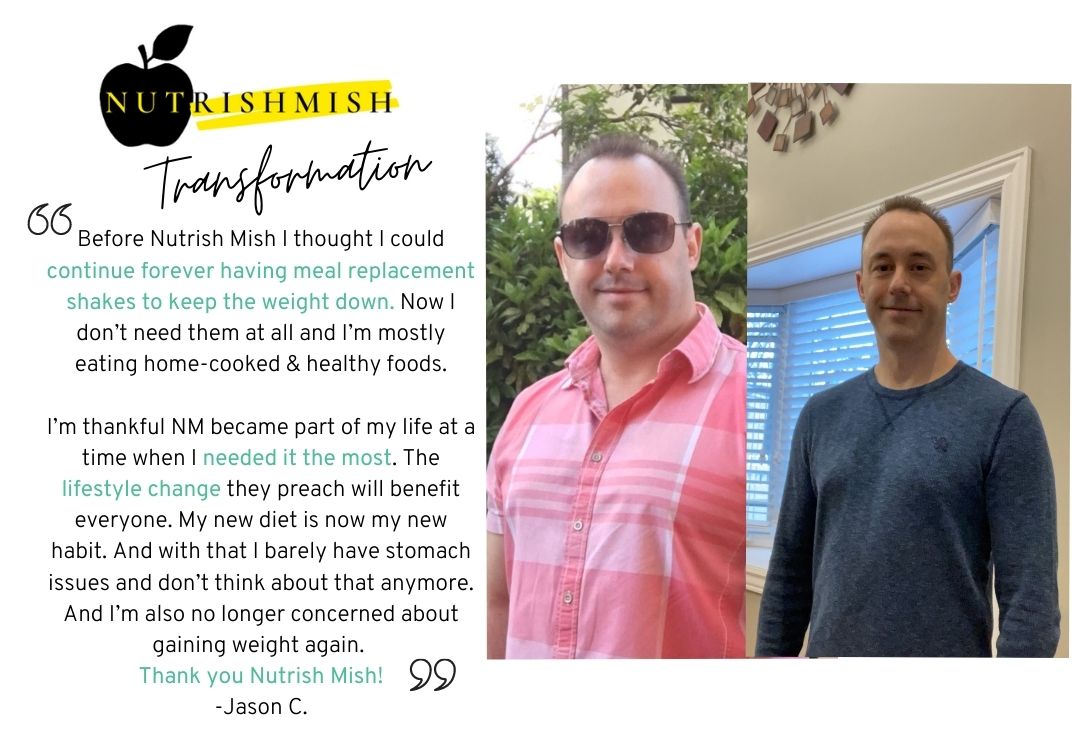 How long have you been coming to Nutrish Mish? What made you start?

Just over 1.5 years. Nutrish Mish conducted nutritional seminars at my employer and I found them interesting. My employer bought sessions to raffle off and I was one of the lucky winners! Little did I know what a huge impact on my life that was going to be. And I’m still a proud member today!

What has been the biggest transformation you have seen in yourself (mindset wise, habit wise, etc)?

I’m a cook now lol! I went from not knowing how to cook to cooking and eating all kinds of healthy meals. Previously meal planning for me only involved which takeout menus I would be looking at lol.

What was a misconception you had before starting Nutrish Mish? In what way has your mindset on food/nutrition/health changed?

Before Nutrish Mish I thought I could continue forever having meal replacement shakes as part of my diet to keep the weight down. I thought I figured out the trick. Now I don’t need them at all and I’m mostly eating homecooked and healthy foods. And I no longer have weight gain issues. I also snack much less than I used to. Another misconception is I thought it was a good idea to eat extra food that was leftover so that it didn’t go to waste. I remember my parents always telling me to do that. But that is a terrible idea.

What made this time different then other times you have tried to get healthier or lose weight?

This time around my way of thinking and choice of foods has changed permanently for the better. I have a new diet that just comes naturally. Prior to Nutrish Mish I didn’t know anything about cooking and now every week I’m in the kitchen confidently preparing healthy meals.

What advice would you have for someone just starting with Nutrish Mish?

This program works because it’s not just another dieting program to follow. It’s a diet and habit changing program. A change that will last forever if you want it to. You don’t have to use their recipes, but they are very helpful. Many recipes are quick and simple which helps facilitate change. And the program gets easier as time goes on. You’ll be doing less tracking as your new routine becomes more natural and automated.

I couldn’t name just one lol. My favorites are Pepper Steak, Parmesan Herb Crusted Salmon, and Egg Roll In A Bowl.

I have a story to share because Nutrish Mish has changed my life more so because of my past experiences. In the past my weight has been like a roller coaster ride. It was a normal routine for me to gain up to 35lbs and then lose it all after going on a liquid diet. I kept clothes of different sizes so I had them at times when I needed them. During periods of weight gain I would tend to overeat because I was so hungry by not having snacks in between meals. Often, I’d find myself eating what the kids wouldn’t finish because I had the mindset that I didn’t want food to go to waste. And then I’d be snacking on the kids snacks when they had theirs. Eventually, I’d reach a point when I decided it’s time to lose weight again. And I would replace many dinner meals, since that’s the larger meal, with meal replacement shakes. I would do that for months and I’ve been through that cycle three times. My longest stretch was just over a year which I abruptly stopped after developing a stomach pain. I didn’t know the cause of the pain, but I felt it every day for a month before I tried changing some things with my diet. First I stopped the meal replacement shakes, then alcohol and then coffee. None of that made a difference and the pain continued on for months while I saw doctors and had several tests done. After a while of that going on I started the Nutrish Mish program. After a couple of weeks, the pain started occurring a little less frequently and I remember thinking I wasn’t sure if that was due to Nutrish Mish or not. A month into Nutrish Mish and the pain was occurring even less frequently. I shared my thoughts with my doctor when the last of my test results came in and my doctor diagnosed me with a digestive issue. His recommendation was to watch what I eat and continue with the diet change that I was getting from Nutrish Mish. The timing of me starting the Nutrish Mish program was right when I needed it the most! Before Nutrish Mish each week I would eat out for breakfast 1 day a week, lunch 7 days a week, and dinner 4-5 days a week. Thanks to the Nutrish Mish program my natural routine now is to eat out just 3 meals a week. I went from not knowing how to cook to cooking something every week. And I would never go back to my old ways after my experience. Eating takeout so much back then was causing too much inflammation in my body and it reached the point of reacting with pain. Most people may never experience that, but I did. However, I always knew I had some sort of a digestive issue. But it was mild back then. I knew certain foods would upset my stomach. So I’d always be thinking about what to eat while I’m out somewhere as to not upset it. That was annoying, but it easily became the norm for me and I didn’t think much of it. From one year to the next the digestive issue became worse. When that pain developed and wouldn’t go away, that’s when I knew something was seriously wrong. Fortunately for me I didn’t have a serious or life-threatening issue, but the thought sure did cross my mind in the beginning. I’m thankful Nutrish Mish became part of my life at a time when I needed it the most. The lifestyle change they preach will benefit everyone. My new diet is now my new habit. And with that I barely have stomach issues and don’t think about that anymore. And I’m also no longer concerned about gaining weight again. Thank you Nutrish Mish!