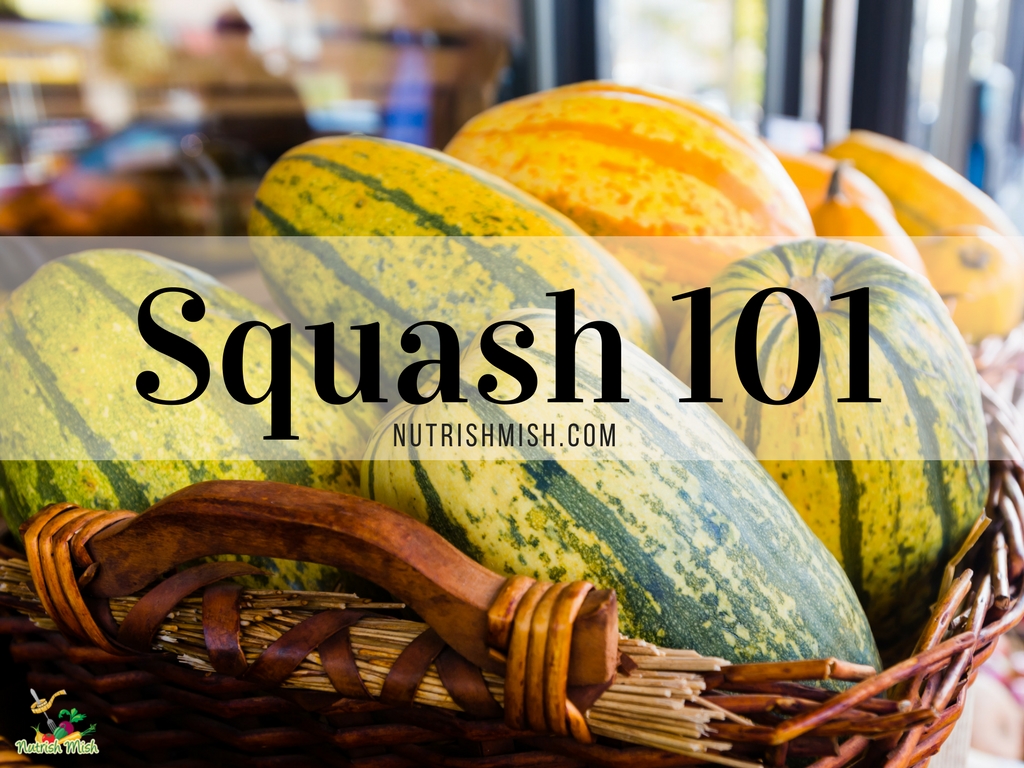 With such a variety, choosing a squash to prepare can be overwhelming. They come in all shapes, sizes, and tastes, yet they all have endless uses in the kitchen and are all extremely nutritious! Most people think "vegetable" when they think of squashes, but squashes are actually classified as fruits. We’ve compiled descriptions of the most common varieties of squash as well as basics for cooking each one! 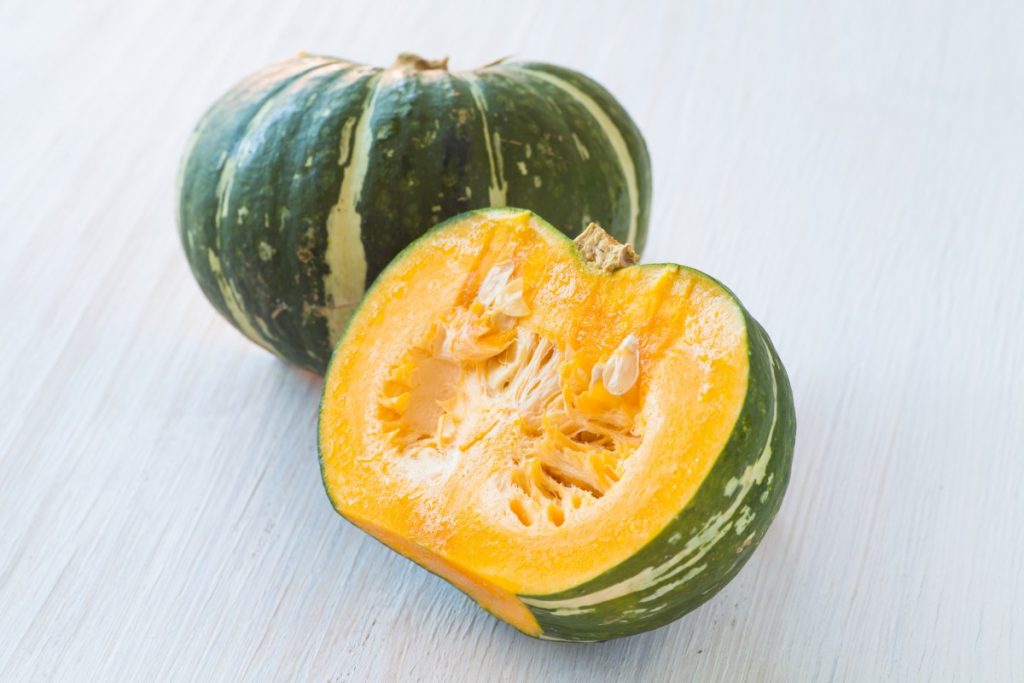 [kah-BOH-chah]:
Features: Kabocha squash has a dark green coloured skin and has a shape similar to a pumpkin. It is round and squat with a flat top, and its dark skin is lined with pale uneven stripes. The peel is hard, and although often discarded, can be eaten if cooked soft enough. The flesh inside is orange-yellow.

Taste/Texture: Taste is a nutty, earthy flavor with just a touch of sweetness, like a hybrid between a sweet potato and a pumpkin. When cooked, the flesh becomes tender and buttery in texture.

Nutrition: Kabocha squash provides vitamin A, C, some B vitamins, calcium, iron and fiber. The seeds of the Kabocha squash contain a good amount of zinc. A single cup of kabocha has only forty calories, and has super low carbs at only 7 grams per cup, so it is definitely a food you can eat in volume!!

How to prepare: Cut your Kabocha in half lengthwise, remove the seeds, and then cut each half into 3 pieces lengthwise. Preheat your oven to 400 degrees and line a baking sheet with foil. Toss your squash wedges in a couple tsp of coconut oil (or olive oil), sea salt, and cinnamon until coated. Place on the baking sheet and bake for about 30-35 minutes or until fork tender. Roasting isn't all you can do. Pureed kabocha can make an awesome base for creamy soups and can be used in baking! 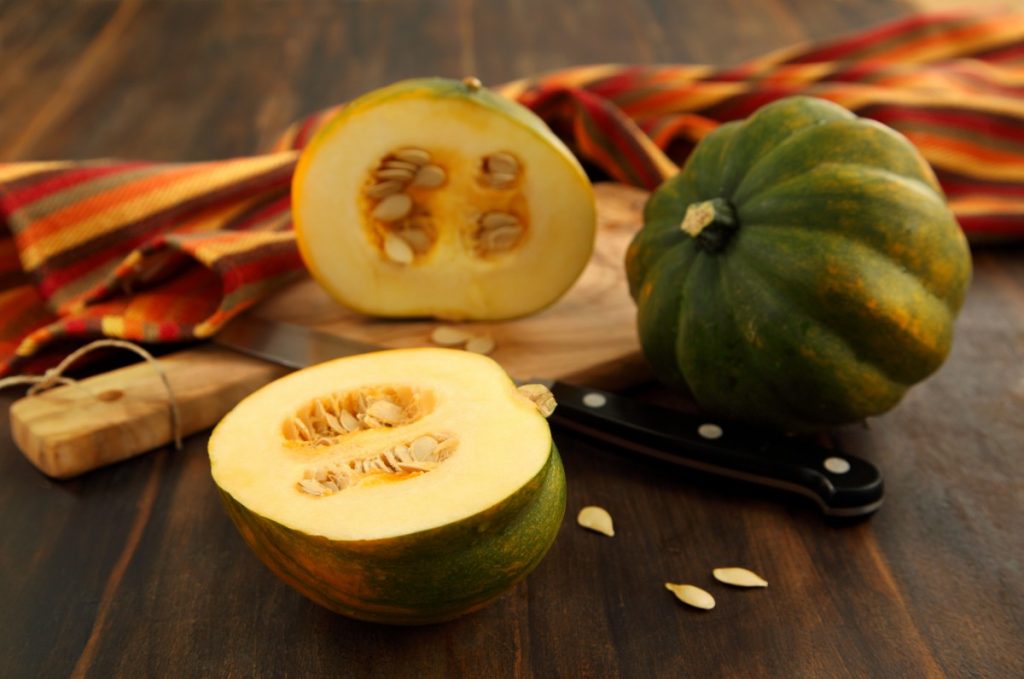 Features: Acorn squash looks similar to kabocha, but with a longer shape. It has tough, dark green skin with deep ridges.

Taste/Texture: It is a winter squash but has similar taste and texture to summer squashes. It has a very mild flavor, and is therefore very versatile.

Nutrition: Acorn squash is higher in carbohydrates than other types of squash, yielding about 30g per cup. However, 9 grams out of that 30 is fiber, which is a good portion of your daily value, and acorn squash contains no simple sugars. In terms of vitamins and minerals, acorn squash has significant amounts of vitamins C, A, thiamin, pantothenic acid, and other B vitamins. Its range of minerals includes potassium, magnesium, manganese, iron, copper, phosphorous, and calcium.

How to Prepare: Preheat oven to 425 degrees and line a baking sheet. Halve squash crosswise. Scoop out seeds, and discard or save for later roasting. Slice a small piece off the bottom of each half just enough to level. Set squash halves, scooped sides down, on prepared sheet. Bake until golden, 20 to 25 minutes. You can season prior to roasting with any seasonings you like. Once cooked you can cut and eat as is, or stuff the halves with ground meat, rice or quinoa, veggies, etc.

Features: The Delicata squash has a creamy colored skin with green striped lines. The flesh inside is an orange yellow that turns more golden when cooked. It has a delicate skin (hence the name),  and therefore it is hard to store for a long time. It is best prepared within 3 weeks of buying.

Taste/Texture: Has a "brown sugar" type flavor, many say it tastes like a cross between fresh corn and pumpkin pie. It is soft and tender when cooked.

Nutrition: Delicata is another lower carb squash. A 1 cup serving only has just under 10g of carbohydrates. Delicata squash contains high amounts of Vitamins A, C, iron, and calcium!

How to prepare: Preheat your oven to 400 degrees. Cut your squash into 2 halves lengthwise, discard or set the seeds aside, then cut into "half moon" pieces. Season to your liking (good with cinnamon & sea salt), and coat lightly with coconut or olive oil. Scatter the pieces on a lined baking sheet and roast for 30ish minutes, turning the pieces every 10 minutes or so. You want the pieces to be golden brown and have a creamy texture. You can also keep the halves whole and stuff them with your desired ingredients, just like with the acorn squash halves. 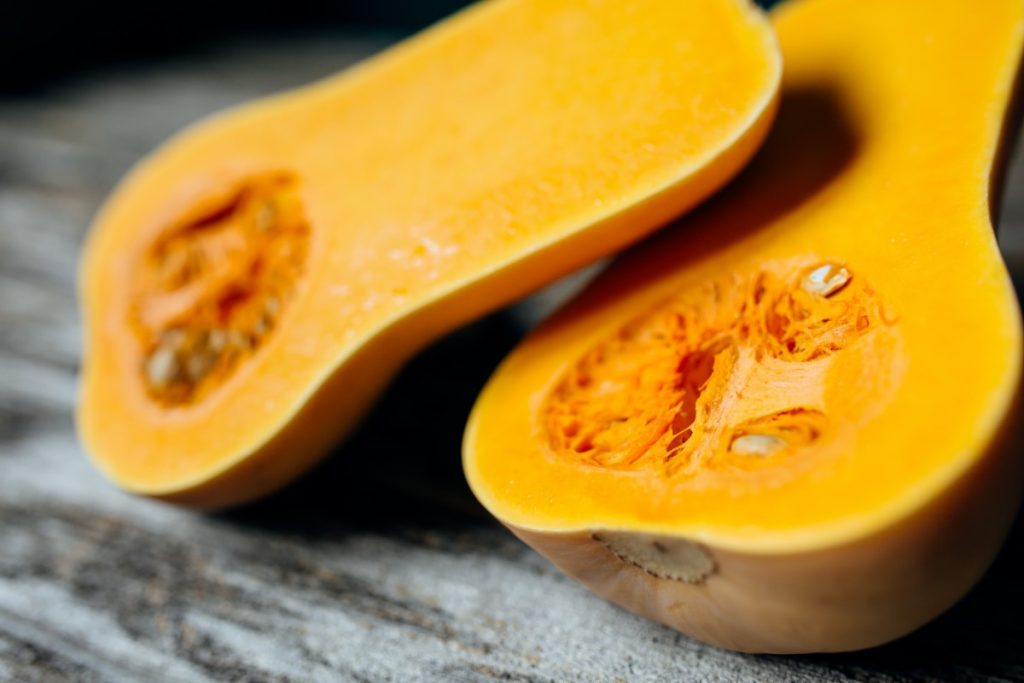 Features: The interior is orange and the outer cover is a lighter orange/yellow, which darkens as it grows.

Taste/Texture: The butternut squash is similar to a sweet potato in both taste and texture, but is a little lighter in density.

Nutrition Facts: Although butternut squash is starchy, the carbohydrates are lower than that of a sweet potato, at about 16 grams per cup, and about 3 grams of sugar. It is super high in antioxidants, and one serving contains about FOUR TIMES your daily value of vitamin A. It is also high in immune boosting vitamin C and reduces inflammation.

How to Prepare: Start by cutting the top and bottom from the squash, then cut the thinner “neck” from the fatter bulb area. Remove the skin with a pairing knife or peeler. Remove the seeds and discard or set aside, then slice the squash into cubes, usually about an inch to an inch and a half in length. Toss the cubes in desired seasonings and roast in a 400 degree oven until tender, about 20 minutes. If you do not have a way of removing the skin, you can roast each half open side down for 30-40 minutes until soft, then scoop out the flesh and cut into cubes. Makes an awesome side dish on its own or addition to salads, stews, etc. 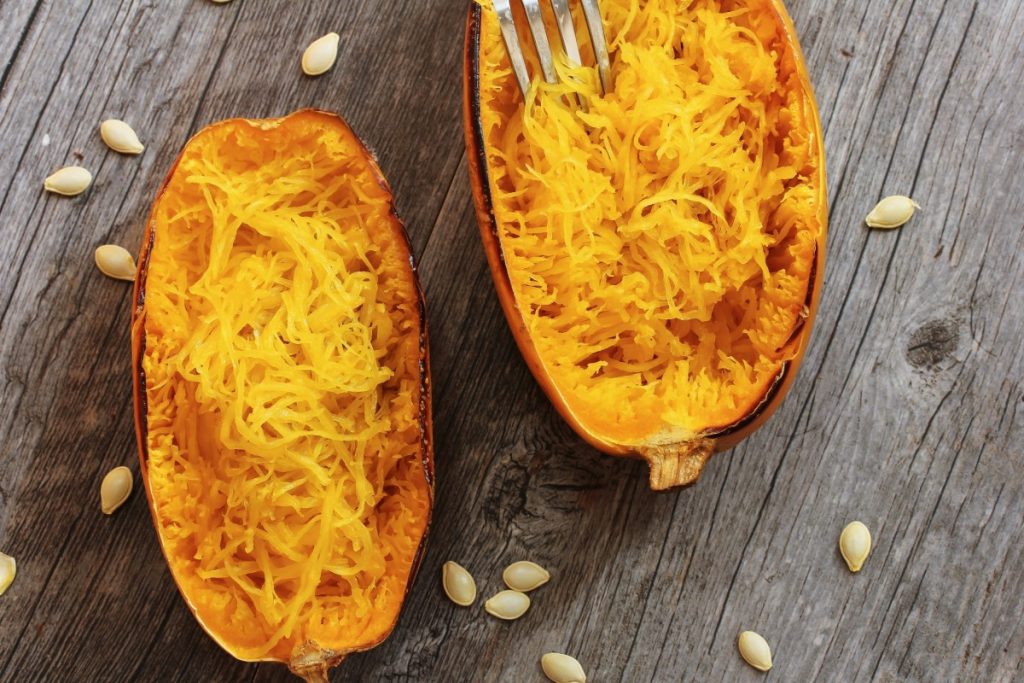 Features: Oblong and vibrant yellow outside with tough skin and with yellow flesh inside. When cooked, the inside scrapes out in strands resembling thin spaghetti. This makes it an amazing low carb pasta substitute!

Taste/Texture: Spaghetti squash has a very bland and plain taste, making it an awesome base for any pasta dish or meal.

Nutrition: Spaghetti squash is one of the super low carb squashes. You can have THREE CUPS for only around 20g of carbohydrates, as compared to 1/2 cup of pasta which has 20g of carbs. That sounds like a pretty fair trade! In addition, this squash also delivers a good dose of fiber, Vitamin C, Vitamin A, potassium, and calcium.

How to Prepare: Preheat oven to 400 degrees (do you notice a trend?), using a LARGE knife, CAREFULLY cut your spaghetti squash in half, long ways. Scoop out the seeds and discard or set aside. Brush each half with just a little bit of oil, place spaghetti squashes open side down on a baking sheet, and bake for 35-40 minutes or until a fork can easily pierce through the skin, and the flesh inside is very tender. Once cooked, Scrape out the insides until you have a huge pile of "spaghetti" and serve like you would pasta.

In addition, you can also make spaghetti squash "boats" by stuffing the spaghetti back inside the skins with desired pasta sauces/toppings. The flesh of spaghetti squash can also be used in a variety of creative ways like for hash browns or pizza crust! 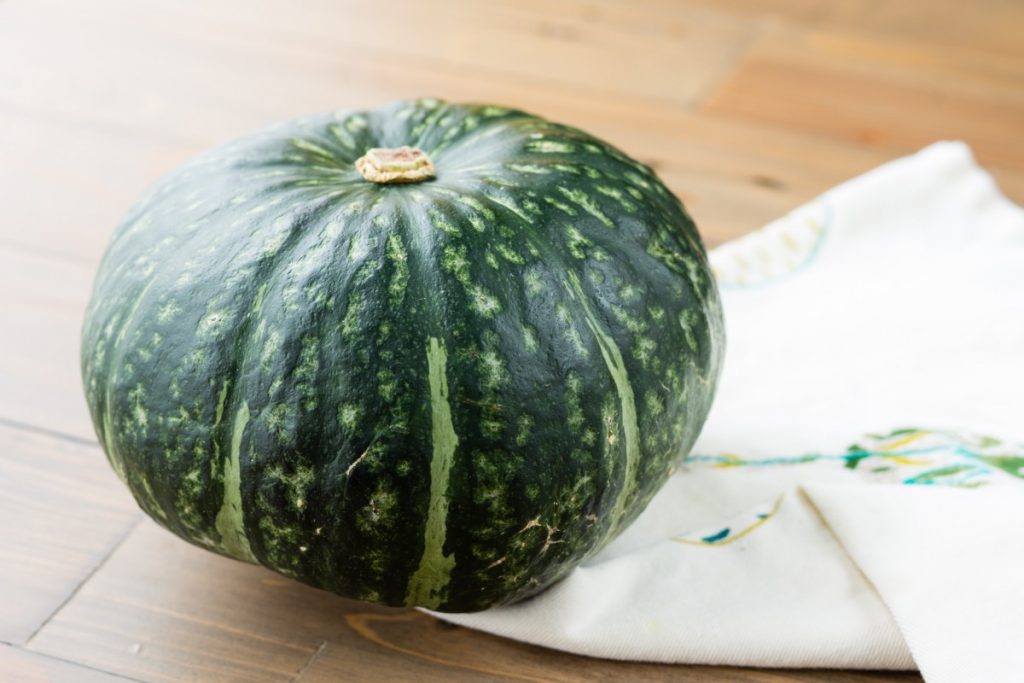 Features: Squat and green, with lighter green variegated stripes kind of resembling other types of winter squash. The key feature of buttercup squash is the lump on their bottoms. When freshly cut, they almost resemble a cucumber, but cooking makes the flesh more dense and dry. When baked the flesh becomes a rich orange color.

Taste/Texuture: The buttercup squash is not stringy like some other squashes and has a mildly sweet flavor.

Nutrition: Fairly low in carbs, 1 cup yields about 15-20g of carbohydrates and about 60 calories. Its vitamin and mineral profile is similar to that of other squashes, as well as its antioxidant content.

How to prepare: Cut the squash in half, carefully, and discard/save seeds. Place the cleaned halves cut-side up on a rimmed baking sheet or in a shallow baking dish. Brush the halves with olive oil and sprinkle with salt and pepper. Pour about ¼ of an inch of water in the bottom of the pan, roast the squash in a 350-degree oven until tender. 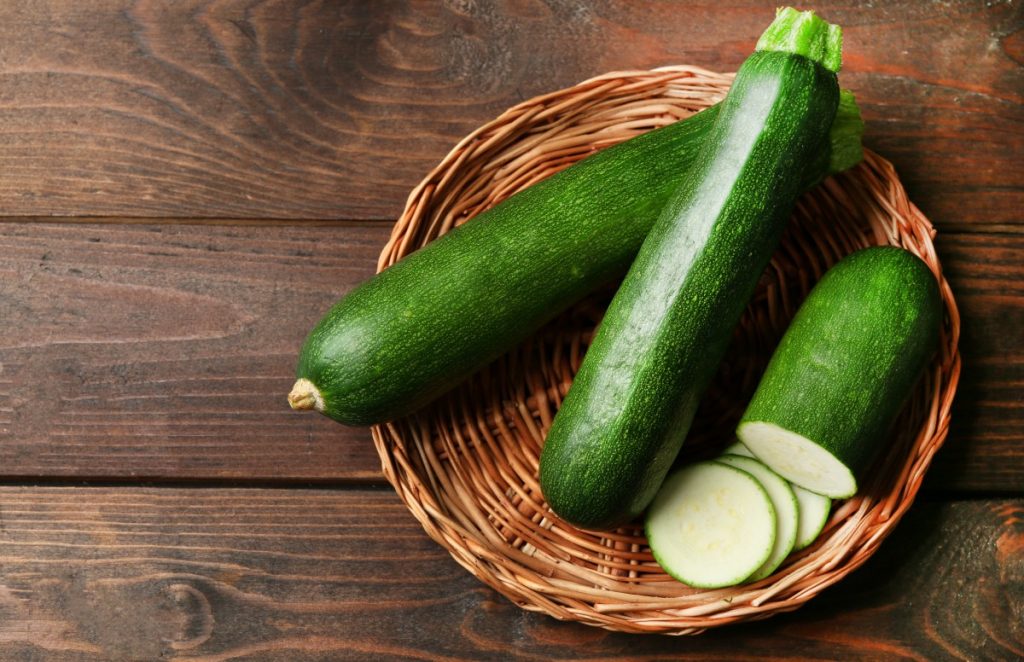 Features: Another popular variety, zucchini squash is a summer squash, so unlike the other squashes mentioned, it is different in shape. It is dark green and it is similar in shape to a cucumber and can be easily sliced into.

Taste/Texture: The zucchini is very mild in taste, both raw and cooked, therefore it can really pair with any dish.

Nutrition: Zucchini is extremely low calorie. One medium sized zucchini only totals around 30 calories, so you can go nuts with this one. As a summer squash, it is not starchy like many of the aforementioned squashes. It contains good amounts of Thiamin, Niacin and Pantothenic Acid, and a very good source of Dietary Fiber, Protein, Vitamin A, Vitamin C, Vitamin B6, Folate, Iron, Magnesium, Phosphorus, Potassium, Zinc, Copper and Manganese.

How to Prepare: Slice it and eat it raw with some hummus or other dip, or spiralize into zucchini noodles as a pasta sub. If you are cooking it, you can simply slice it into coins and steam or cook in a pan with desired seasonings until softened. Cooked zucchini makes a great addition to omelets, pizza, and pretty much any dish, really. Shred it into homemade hash browns or even into baked goods!

Similar to zucchini squash, yellow is identical in shape and size but with yellow skin and inside. It has a slightly more bitter taste but can essentially be prepared in all the same ways as a green zucchini squash.